There are many features on a river, but here is a brief description of a few of them:

Meanders - The bends in the river. They form when the water in a river encounters more friction on one side of the channel than the other, so the water on each side moves at different speeds. The faster water has more energy so it erodes more, while the slower moving side had less energy and deposits more. Therefore over time, the river curves towards the side where the erosion is occurring, forming meanders.

Point Bar - The inside of a meander where a mini sandbar is formed from all the deposition. The water encounters more friction on this side so it slows down, losing energy. It no longer has enough energy to carry the sediment, so it is deposited here, forming a point bar.

Cutbanks - The outside of a meander where there is a lot of erosion. The river moves faster here since there is less friction. Therefore the water has more energy and can carry a lot of sediment, so it erodes a lot. 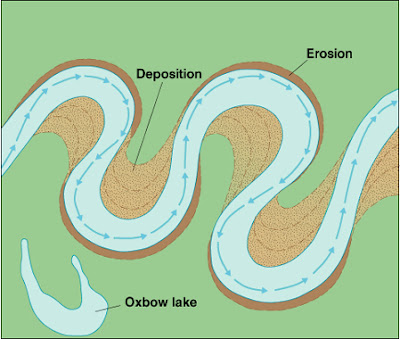 Floodplains -The area around the river made of fine grained material that would be underwater in a flooding event.

Levees - Sandy ridges running parallel to the river. When a river floods, the largest material is deposited first on the edge of the river, forming the levees.

Crevasse Splay - A place where water has broken through a river and splays out onto the floodplain.

Yazoo Streams - Smaller streams running parallel to the river. They form after a flooding event when the water reorganizes itself into a this smaller stream. Yazoo streams indicate that the floodplain is very large.

Meander Scars - Marks on the river bank where meanders once were but have since moved. There is usually deposited material there. 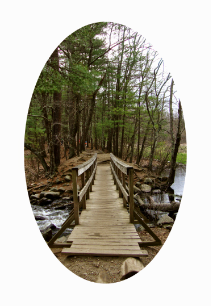